Membership of the following Societies:

In my practice it involves travelling to destinations, engaging directly with the natural environment which is an inspirational source of motivation for my work.  The changing  seasons and atmospheric conditions in nature stimulate and provoke my thoughts. This leads to an interconnectedness with nature and informs my response to the application of both representation and abstraction in my paintings.  Effectively working with a closeness to the elements, provides a field of vision with the geographically historical remoteness of places.

In my work I trace the primeval contours of boundaries and ancient cultures, which have left their mark above and below the surface of both land and sea.  The work also draws on the narrative which is often in areas where communities define themselves through their own rituals and folklore. I record experiences in my sketchbook for further and future development.

The objective in the process of making work, is to transfer imagery through the physicality of techniques and materials, onto multilayered surfaces. The fragmented imagery may express a notion of the passing of time, making permanent the ephemeral, which may encourage the viewer to reflect on their own personal journeys. 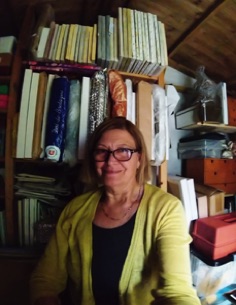